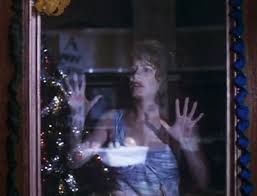 New Year is, as everybody knows, a massive anticlimax. We all get frantically excited about what turns out to be just a glib transition into more of the same. Here are two films (showing in the BFI’s Cult strand) which try to give New Year some genuine significance either by making the transition rather more brutal or by refusing it entirely. Naturally they fail, but in often treasurable ways.

New Year’s Evil is set around a live TV show in LA that’s an improbable combination of phone-in, live music show and New Year celebration (through four different time zones) – viewers are asked to vote for the best ‘New Wave’ single of the year, although we never find out who wins. Probably not one of the bands in the studio, who, though presented as desperately edgy and made up to the nines, seem largely to be churning out drab pub rock, or the LA equivalent of that. The sight of the crowd gamely trying to pogo to some uninspired blues-rock noodling is one of the comic highlights here.

All this and the promise of a torchlight ski parade in Aspen! One hardly needs a mad killer, but there is one, ringing in to tell the programme’s female host – ‘Blaze’ (Roz Kelly) – about his plan to murder someone every time midnight strikes in one of the time zones. It’s a promise he makes good on, at least until, while driving to his next murder dressed as a priest, he is involved in an altercation with a motorcycle gang.

By this point the film has shifted its focus from the TV studio to the killer, who calls himself ‘Evil’ on the phone, as though to give the title an unnecessary additional meaning. Indeed , everything about ‘Evil’ is unnecessary – why does he need to kill someone every time midnight strikes? And why does he need to adopt various different guises (male nurse, disco sleazebag) in order to do it?

Luckily Kip Niven’s performance as the killer is strong enough to make it work – his subdued manic glee suggests an understated Jim Carrey, while the difficulties he encounters while putting his plan into practice bring to mind a psychotic take on John Cleese vehicle Clockwise.

Just as Evil’s plans go astray, so Emmett Alston’s film eschews, for better or worse, the formulaic. The victims are female, but older and more sympathetic than is usually the case with slasher flicks, and the only teenage victim gets away.

Evil eventually turns out to be Blaze’s husband Richard, seemingly driven insane by his wife’s attempt to ‘castrate’ him (presumably by having a successful career). Cornered, he dons a clown mask and recites a bit of Hamlet’s famous soliloquoy before throwing himself off the TV studio roof.

However, his son Derek (Grant Cramer), presumably also feeling the effects of castration, is there to pick up the baton, or in this case clown mask, and the film ends with him driving the ambulance containing his mother off into the night. That he is not entirely the full shilling comes as no real surprise as he has spent much of the film with a pair of Mom’s tights wrapped round his face. Still, there is a pleasing black humour at work here.

The other notable performance aside from Niven’s comes from the guy playing a police psychiatrist – he is only onscreen for a minute or so but makes quite an impact, bellowing his diagnosis of the killer’s likely motivations at a pitch that puts him quite at odds with the rest of the film, oddly reminding me of Stephen Stucker’s interjections in Airplane!

Bloody New Year has no really off-key performances – they are all bad. The final film from Norman J Warren, whose previous outings include such cheap and cheerful British horrors as Satan’s Slave and Inseminoid, this is less professional-looking even than those but it begins quite strikingly. During a flashback (black-and-white shading into colour) to a New Year’s celebration from 1959/1960 a woman tittivates herself in front of a mirror. We fully expect to see her murdered by a lurking psycho, but instead she is snatched into the mirror by a hand reaching out of the glass.

This is followed by a leap to the present day (of the mid-80’s) where a group of holidaymakers in a seaside resort rescue an American tourist from being intimidated by fairground workers on the waltzers, then – after destroying the ghost train – speed off with the workers in hot pursuit. It’s a larky sequence that brings back dim memories of the Children’s Film Foundation, memories that never entirely go away throughout the film.

At any rate our heroes – two couples, a single guy and the American woman – find themselves on an island where it’s still 1959, or somewhere between 1959 and 1960, for it is in a hotel here that the New Year’s celebration from the pre-credits sequence was taking place, and on some level possibly still is.

Things have gone awry here due to a military experiment to alter the very structure of time. This obviously went terribly wrong – or maybe succeeded, because the structure of time clearly has been changed, judging by the characters from bygone days still to be seen wandering around, like a disfigured airman and a hotel maid. And not just the structure of time but the structure of other things as well, such as the kitchen table that disgorges a seaweed-covered monster, or the dragon’s head carving on a bannister that comes to life.

We also get indoor blizzards, a man emerging from a film and characters appearing to die before returning with lumpy faces and a bad attitude. Bloody New Year may sound like the kind of film that is more fun than it sounds, but in fact it proves quite entertaining on the level of having no idea what the hell is going to happen next. And if the special effects aren’t particularly persuasive, at least they are more believable than the performances. And even here the makers have the good sense to kill off the most irritating ‘actor’ first.

There is also a ‘quote’ from the climax of Arthur Crabtree’s 1958 film Fiend Without a Face, which is supposed to have been showing in the hotel. The scenes in which well-realized stop-motion brains with antennae and writhing spinal cord tails besiege Marshall Thompson and his fellow cast members have the possibly unintended effect of suggesting that special effects have not necessarily improved over the intervening years.

Bloody New Year ends with most of the cast – dead, alive, whatever – doing the conga as they celebrate New Year in the hotel, while the American bangs ineffectually on the window. It seems as good an ending as any other. I like to think that were I to examine the seemingly random events of this film in detail some sort of complex structure would make itself apparent – hidden resonances, probably even a foreshadowing of Brexit (the film was called Timewarp Terror in the States). But the surface ineptitude is discouraging. Also, I am lazy.

Still, if Brexit is anything like this we’re in for some excitement. A real transition. A belated happy New Year to all my readers, wherever – and whenever – you are.