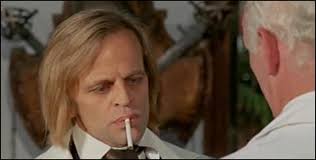 88 Films’ Italian Collection yields this giallo in which a masked murderer stalks an all-female (the patients not the staff) mental institution but the occupants are all too busy playing with themselves and each other to notice, at least until a woman succumbs to a crossbow in the throat and at last the police are called. Who could the killer be? Lugubrious doctor Klaus Kinski? Hunky gardener John Ely? Or a character so minor that by the time the revelation came I had forgotten he was ever in it? Yes, that’s the one.

Only at the end, where the killer is shot rather excessively by the police, does De Leo seem engaged by the violence, and even then it’s as if the previous sex scenes have finally brought him to a messy climax.

The killer, it seems, has only been intent on concealing the murder of his wife amidst a sequence of other murders committed by ‘a maniac’. However, his impression of a maniac is a little too enthusiastic to be merely a disguise, involving as it does numerous killings committed with medieval weapons and instruments of torture on display in the sanatorium (formerly a castle) before he even gets around to the wife – then, after his attempt to kill her fails, he bashes a whole roomful of nurses to death. He sure is a beast, although his profuse sweating in the final scenes seems to refute the ‘cold-blooded’ tag.

People in this film are constantly reminiscing or fantasizing, giving rise to a recycling of previous footage, to no apparent purpose – at one point the heroine appears to be recalling an image of herself writhing naked in her sleep. There is something strangely poignant about all this, as though the characters were trying to think or dream their way out of the film, only to find themselves still caught up in its banalities. I knew how they felt.

The extras on this, also from 88 Films, also feature an actress complaining of the cold. With all the current hysteria over #MeToo it seems a wonder that these films are still on the shelves, but then again, like the medieval weapons on the sanatorium wall in CBB, they are relics of a bygone age, and packaged as such.

And when I say ‘hysteria’ that isn’t a misogynistic allusion to wandering wombs, a lot of the hysteria is male. Even Michael Haneke has chipped in, talking about a ‘witch hunt’, surely an unfortunate term under the circumstances. It’s as if women can be oppressed for centuries before biting back but men are whining like bitches after a couple of weeks.

I rather enjoyed Happy End, last year’s offering from the Austrian director, but must take issue with his assertion that nobody would dare make In The Realm Of The Senses (1976) in the present climate. Aside from the fact that they wouldn’t really need to – since it has already been made – art always carves out its own justification whatever the circumstances. No, a far better example for Haneke to have chosen would be the same year’s Bloodsucking Freaks (aka: The Incredible Torture Show).

Even at the time Joel M. Reed’s film was the target of a campaign by a group called War Against Pornography. In some ways it’s hard to see why, since whatever Bloodsucking Freaks is, it isn’t really pornography – there’s barely any sex in it at all. In other ways, however, you definitely can see why. It certainly objectifies women: one is used as a table.

In fact the institution at the centre of this – New York’s very own Theatre of the Macabre, presided over by ‘The Great Sardu’ – is effectively a sort of processing plant for naked white women. Either they are used and abused in the show, crated up and exported to the Middle East as white slaves – a lucrative sideline – or kept in a cage and fed on human flesh.

Still it’s surely too shoddy and ludicrous to really give offence, especially as this is what it is trying so very hard to do. The most notorious scene has a crazy doctor sucking the juices of a woman’s brain through a straw, which is enough to make even the Great Sardu and his dwarf assistant look askance. But when the doctor blows into the straw to make a gurgling sound, as a child would with a milkshake, the prevailing spirit of the thing is made transparent – a kind of perverse innocence.

Which is to say it’s childish – just in an adult way. Sardu tells his audiences: ‘If you’re bored by it pretend it’s real, if you’re excited by it, pretend it’s fake.’ Which suggests that the show is neither fake nor real, but exists in some sort of void awaiting the observer’s input, as in quantum physics. As with the show, so with the film. It isn’t up to the job of creating its own world – like children playing a game we, the audience, must pretend in order to be get anything out of it. Meanwhile Sardu’s own pretensions towards sophisticated menace fall quite flat: Seamus O’Brien’s performance musters all the suave menace of Dale Winton – a Winton who has discovered to his horror that even after Pets Win Prizes there is further to fall.

The plot has him kidnapping ballet dancer Nastasha (Viju Krem) for use in his first ‘legitimate’ production. Her boyfriend hires a crooked detective to discover her whereabouts, but in the event all the detective has to do is pick up a copy of Variety – ‘Your girlfriend didn’t disappear, she just went off Broadway’, he explains. It’s the film’s one good joke, though there is a brutal wit to the production itself, wherein Natasha, hypnotised into obedience, employs her balletic skills to kick an eminent critic to death onstage. I could be wrong but I think that really might be art.

The film isn’t, but you can argue that it depicts, or attempts to, a world radical feminists should recognise – one run by venal, dumb or sadistic men where women are bought and sold, tortured in the name of entertainment, and locked up when they create difficulties. In the end the ‘caged sexoids’, as they are credited, are released, and kill Sardu: the final shot is of one of them eating a penis in a hot dog bun. So there – as I said of Microwave Massacre, it was a feminist film all along. Although I was joking then.

Even so it seems unlikely that Oprah Winfrey will be starring in a remake any time soon – even though leather-clad whip-wielding black women are the only females here to occupy what you might call positions of authority. Whatever you think of Bloodsucking Freaks it isn’t what you’d call ’empowering’. I wouldn’t recommend showing it in schools.

Yet the problem with ’empowering’ statements is that they often come across as bland. They are ungrounded – that which made them necessary in the first place is never acknowledged. No they probably ‘wouldn’t dare to make it now’, but films like Bloodsucking Freaks are the ground, and if it threatens to give way beneath us, that’s just part of the experience. Culture (to quote Pere Ubu’s David Thomas) is a swamp – without filth, there is no culture. So we should be happy that these films are still with us, no matter how awful they are.