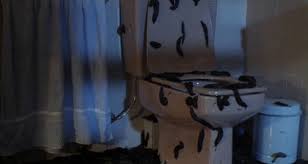 A CAT IN THE BRAIN

It may seem an odd thing to say of a film called A Cat In The Brain but – inured as I am to disappointment in such matters (almost counting on it, you might say) – the last thing I expected to see in it was a cat clawing at someone’s (living) brain.

And yet even before the opening credits finish we have seen several cats doing just that. That they are quite definitely not real cats, more like the sort of puppets you see appearing alongside Harry Hill, does not detract from my enjoyment one bit – quite the reverse in fact. If I were in the habit of giving stars this would earn one all by itself.

The brain in question belongs to film director Lucio Fulci, playing himself – as the fake paws interfere with his grey matter, so we hear his thoughts distorting like a tape being chewed. Yet we are given to understand, in as much as understanding is possible here, that this is business as usual for Fulci as he works on his scripts. I suppose it’s as good an answer as any to that eternal question: where do you get your ideas?

Fulci is a veteran of the Italian exploitation industry, with a prodigous output. He has his fans. I’m not one, but have found much to enjoy in films like Don’t Torture A Duckling and A Lizard in a Woman’s Skin. The titles, for a start. On the other hand I’m not sure that I agree with the statement on the cover of this 88 Films DVD that says: ‘Hitchcock invented the thriller; Fulci perfected it’. But it’s probably a joke.

Anyway, here is Fulci as Fulci, a horror director who suddenly discovers that his gory output is putting him off his steak tartare and generally getting him down. He consults a psychiatrist, Dr. Schwartz (David L. Thompson), who informs him that the boundaries between his films and his reality are breaking down. If this doesn’t sound particularly helpful, that is not Schwartz’s intention. As soon becomes apparent, the psychiatrist is in fact a maniac, whose evil plan is to commit crimes and convince Fulci through hypnosis that he did them.

Fulci makes the ideal fall guy because of what Schwartz calls the ‘stupid theory’ that screen violence begets the real thing. Although in another sense Schwartz is Fulci’s fall guy – by becoming the ‘real’ maniac, he exonerates Fulci and his oeuvre.

Although I sometimes wondered if Fulci’s self-disgust was genuine, watching him over-excitedly urging his actors on in scenes of sexual violence (‘She’s ready for it…Now slap her! Hard!’). Well, the whole point of this kind of metahorror is to keep us wondering where fiction ends and reality begins, though if this achieves that it isn’t by way of an artful blurring of lines so much as through sheer incoherence. As Dr. Schwartz puts it: ‘I’ve seen all your films….and I understand now why you’re in this state of confusion’.

Some of these are hallucinatory, some are presented to us as completed films being watched on video, and some are work in progress. You would probably have to spend a while studying Fulci’s back catalogue to unravel it all. And I seriously doubt if you would be any the wiser at the end of it.

It’s like viewing a series of exhibits in Fulci’s trial for crimes against women (as most of the victims are). But he greets each fresh outrage with a look that suggests nothing more dramatic than chronic indigestion. His performance, if that is the word, is the film’s strongest suit: it has a deadpan-comic quality that contrasts fruitfully with the mayhem transpiring all around him. As well as the aforementioned Harry Hill, he prefigures Larry Sanders in Curb Your Enthusiasm or a version of that show in which the hilarious faux pas have been turned up a notch, and now encompass the decapitation of a young boy by chainsaw.

The ending is hilariously anti-climactic. Schwartz is shot by the police, but offscreen. ‘He won’t be committing any more murders’, says a policeman unnecessarily as he walks away from the psychiatrist’s white-sheeted body. Fulci is left to sail off with a bikini-clad young woman on his yacht named Perversion. He kills her and uses her for sharkbait, but of course this turns out to be another film within the film.

As amusing as A Cat In The Brain sometimes is, its refusal to commit and its endless random carnage are also wearying and indigestible. But here, perhaps, it achieves its goal: you know how Fulci feels. Or how he looks like he feels.

Humour and horror are said to be opposite sides of the same coin but it is that really true? Maybe they are even closer than that. Juan Piquer Simón’s 1982 horror flick Pieces has the distinction of being a film where it’s really hard to work out if it is serious or some kind of spoof and Slugs, based on Shaun Hutson’s novel, suggests that this is a line Simón has chosen to walk.

Slugs: The Movie, announces the opening title and straight away we are not entirely sure how to take this – yes it may be a nod to the original novel (though was anyone really expecting a film?) but it sounds like we are meant to be thrilled that at last the common garden pest is having its definitive story told on the big screen.

If this is the case we may be disappointed. These slugs in this small American town are not representative, largely because they have been transformed by toxic waste. They have fangs. They eat people. They also give the lie to the adjective ‘sluggish’, since – although we don’t see them zooming around exactly – they seem able to quit the scene of a bloody killing with surprising rapidity, leaving the authorities wondering what the hell happened.

If its portrayal of slugs is not wholly accurate, neither is its portrayal of human beings. A lot of this has to do with the dialogue, which demonstrates a Spanish director’s tin ear for English…or does it?

On the Arrow DVD extras someone recalls how actors would offer to redo lines that weren’t quite right only for Simón to assure them that it was fine. And he was correct – it isn’t quite right and it’s fine.

When our hero, health inspector Mike Brady (Michael Garfield), is told by his wife about the deaths of a local couple in a slug-assisted conservatory explosion, he all but yells: ‘They were a nice couple! I liked them!’ Helped along by some bad acting, the film manages to achieve a kind of hysterical banality that arguably portrays a deeper – unless I mean shallower – truth about American life than a more realistic approach might have done.

Just before the conservatory conflagration the ill-fated couple hold this exchange:

This might be an attempt to capture the kind of bickering that characterises a tired marriage, but that final non-sequitur delivers it into the realms of the absurd. Towards the end an ill-fated character enjoys a last embrace with his wife as he tells her that he is off to put paid to the mutant killer slugs and she bravely teases him: ‘I trust that these so-called killer slugs of yours aren’t 18 years old and speak French.’ We may know what she’s getting at but it is the concept of 18 year old French-speaking slugs that sticks in the mind.

There were times when I was convinced that this was a Bunuelian satire on the bourgeoisie. We should note that the slugs often emerge from the toilet to undermine the lives of solid citizens such as ‘Dave Watson’ who in the film’s standout scene is trying to conclude ‘the shopping centre deal’ in a posh restaurant. No sooner has he delivered a toast ‘to the beginning of all the great things yet to come’ than his face explodes and worms burst out of his eye sockets. It’s convincing and it’s hilarious. If there was a barrier between comedy and horror it is now demolished.

Hang on though, worms? Isn’t this about slugs? Ah yes, but you see the guy has eaten slug-contaminated salad (an eventuality signalled by a previous shot of a lettuce leaf quivering ominously), and has thus been infested with their parasites (‘blood flukes’), which have grown to comparatively enormous proportions inside him for some reason.

We are told this by an ‘English’ scientist, an acquaintance of Mike Brady, who is portrayed by Spanish actor Santiago Álvarez in another memorably unconvincing performance. Though he is able to unravel the mystery of the worms, he expresses no surprise at the fact that that these slugs have hinged jaws with fangs.

But it may be that his specialism isn’t biology, but special effects. It is he who comes up with a possible solution to the plague of slugs: a ‘lithium-based arsenic’ that explodes on contact with moisture, which he recommends pouring into the sewers. It’s a method that, whatever its effect on the slugs, is certainly guaranteed to create a series of explosions befitting the climax of a film. The budget is comparatively high. The London Symphony Orchestra have been roped in to play Tim Souster’s score – they certainly lend gravitas to the death of a hamster.

Another set piece is the death scene of a teenage couple having sex. One moment the girl is writhing in ecstasy on the bed, the next she is writhing in agony on the bedroom floor, now a sea of slugs. But if you were thinking that this is an example of horror films ‘punishing’ sexually active women, there is a later scene in which a girl who rejects her boyfriend’s sexual advances then fends off a rapist is also killed by slugs.

So it isn’t sexist. Just misogynistic. Or misanthropic might be a better word. Give the slugs a chance, might be the film’s message – these humans are just fucking everything up. The final shot of a surviving slug on a drain cover is hardly necessary to make it clear that the idiotic idea of blowing up the sewers – and along with them half the town – didn’t work.

By the by there is also a second attempt to complete ‘the shopping centre deal’, which is successful – a shame, because I’d hoped it would be like the dinner party that never happens in Bunuel’s 1972 film The Discreet Charm of the Bourgeoisie. However, even this attempt is interrupted by the hero bursting in gabbling about slugs in the water supply. The mayor, who is now on the case, simply takes the interested parties over to a sink and turns on the tap to demonstrate that water comes out of it, not slugs, the ludicrous simplicity of which is utterly disarming. Of course they are convinced. So was I.

Not being funny, but this film is a triumph.