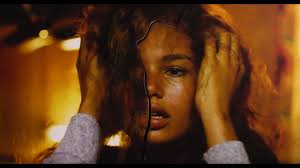 The new film from director Josephine Decker (Thou Wast Mild And Lovely) is a gripping and vivid account of some days in the life of the eponymous schizophrenic teenager (an impressive Helena Howard), who has joined a theatrical troupe which seems at first to give her a much-needed break from the morbid anxieties of her neurotic mother (Miranda July). However, the troupe’s director, Evangeline (Molly Parker), distracted and bereft of ideas, decides to base her latest project on Madeline and her difficult relationship with her mother, a vampiric act which Madeline finds oblique ways of resisting.

There is a tendency nowadays to diagnose mental illness in isolation, as a ‘disease’ with no particular reference to the patient’s environment: Decker’s approach works against that – it’s a remarkably fluid film, blurring distinctions between Madeline’s inner experience and reality, between one character and another, making it clear that Madeline’s condition reflects the social reality around her, if not always clearly.

When Madeline does her ‘party piece’ (impersonating a cat) at a family party given by Evangeline, it starts as a simple demonstration of her theatrical skills but persists until it becomes uncomfortable. This implies her resentment at the way she is being exploited, turned into Evangeline’s ‘pet’.

Or at least that’s one way of looking at it. Just as Madeline evades becoming Evangeline’s pet, so she wriggles free from all (my) attempts at interpretation. Even the title here is ambiguous – does it say that Madeline owns Madeline or that she simply is Madeline? Either way this suggests that she is not to be seen as merely a schizophrenic, a collection of symptoms; at the same time that very doubling of her name suggests both the popular idea of schizophrenia as ‘split personality’ and R D Laing’s The Divided Self. Though the only psychologist name-checked here is Jung, it is Laing’s theories about schizophrenia as a response to the dynamics of family life that come most forcefully to (my) mind.

Which is not to say that Madeline’s mother (or anybody else for that matter) is ‘held to blame’ for Madeline’s condition – we can’t know how much of her worrying stems from having a vulnerable daughter and how much of it is in her nature, let alone determine the extent to which she might have somehow brought about her daughter’s schizophrenia.

The film’s triumph, immeasurably aided by Ashley Connor’s hallucinatory way with the camera, is to create a space where Madeline’s schizophrenia is present in a cloudy fashion, connected to but not contained by her, in the air. What complicates this is that the creative process by which it is accomplished – within the film, the workings of the theatrical troupe, and outside it the making of the film itself – works to actualize schizophrenic fears and fantasies: Madeline’s inner world is exposed and available to be seized: moulded, used and deformed.

At the end Madeline seems to turn the tables on Evangeline, creating her own little performance with the help of the troupe which puts the director at the centre of her own paranoid experience – but how much of this is in Madeline’s imagination? Is Madeline leading a parade down the city street at the end or just making a spectacle of herself?

As with the title we are told everything and nothing: Madeline is the only available definition of Madeline, but who is to say what it covers, where ‘Madeline’ begins or ends? To that extent, Decker’s remarkable film allows Madeline her freedom.

Jim Cummings’ character in his film Thunder Road (which he also wrote and directed) has ‘mental health issues’ too – on this occasion, however, they have gone undiagnosed. We first see him in his police officer’s uniform, delivering a eulogy at his mother’s funeral – this sets the tone, which is to say that it deliberately fails to set it, because it’s in the nature of Cumming’s performance (which entirely dominates the film) to leave us endlessly uncertain over what our reaction should be.

The eulogy is a disaster, full of awkward attempts at anecdotes that go nowhere and culminating in a doomed attempt to convey the deceased’s favourite song (Bruce Springsteen’s Thunder Road) through interpretative dance, the tape player having failed. It resembles a comedy set-piece – the film is an elaboration on a short which consisted of this scene alone – but Jim (also the character’s name) is not quite a comic character, although in certain moments of wounded dignity he does bring Michael Crawford’s Frank Spencer to mind.

There’s audience laughter for sure but it is complicated by sympathy – and even alarm at Jim’s sudden short-lived bursts of anger: should this man really be in charge of his young daughter Crystal (albeit intermittently) – or a gun?

This takes quite the opposite approach from Josephine Decker – the ‘madness’ is contained, and contained in Jim, and we are looking on along with the rest of the ‘normal world’, making our own diagnoses. Dyspraxia, Asperger’s, Tourette’s – Jim’s ‘neurodiverse’ behaviour suggests all of these at various times, yet nothing accounts for him.

Which is as it should be I suppose, although there is more than a suggestion that Jim’s upbringing by his mother is in some way ‘responsible’ for his unconventional behaviour. But this is less character study than high-wire act, as we watch Jim lurch ever further from the socially acceptable (his badge and gun are eventually taken away from him); at least until his ex-wife fucks up even more disastrously than he has.

The film might have become a self-indulgent vehicle for its central performance but Cummings wrings an emotional centre out of his character. The moving ending has Jim taking his daughter to the ballet; there’s a sense of them making a genuine emotional connection through the performance.

Maybe it’s significant that at the end Jim is part of an audience, that he has in a sense joined ‘us’. In Madeline’s Madeline, which is self-consciously about performance, the distinction between audience and performer is not so clear, which makes it the more sophisticated piece of work, allowing us to get inside the ‘madness’, or at least sustaining the illusion that we can.

In truth, this isn’t quite so easy: to the ‘normal world’, madness often presents itself as spectacle, and both of these films, in their different ways, understand – and knowingly exploit – that.