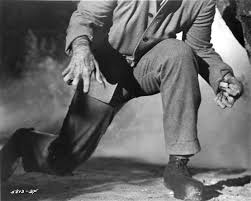 This begins generically but effectively with a screaming girl being pursued across the (German, it turns out) countryside by a nightmarishly-contorted Frankenstein’s monster whose face we never see; this proves, however, to be part of a TV programme being shot in the real Frankenstein’s castle to celebrate the 230th anniversary of Frankenstein creating his monster. Which, in case there should be any doubt about this, really happened, it wasn’t just a book and a film, etc.. Though obviously it is now a TV programme.

The last of the Frankenstein line, world-weary and disfigured, is played by Boris Karloff, grudgingly permitting the TV crew to use his property because he needs the money in order to buy an atomic reactor. The apparent ease with which one can get an atomic reactor home-delivered is presumably a sign of the ‘futuristic’ nature of this enterprise, set twelve years after it was made – though it is one of the few, the film taking place largely inside the kind of gloomy Gothic castle with which we are already familiar.

Although there is the secret underground laboratory, accessed via the original Frankenstein’s tomb – a nice touch (though we might wonder how Karloff manages to get an atomic reactor down there unassisted).

This gleaming lab offers none of the fizzing, flashing, bubbling excitement to be found in mad scientist’s laboratories of old, leaving Karloff with little to do but (at one point) repeatedly hit his monster on the skull with a wooden mallet, while intoning into a microphone the findings this procedure apparently yields (‘Continuity between the medulla and the spinal cord restored.’) Then he goes over to the fridge for a jar of eyes, which he unfortunately drops.

It really is Karloff’s film. As with Peter Bogdanovich’s 1968 film Targets, where he plays aged horror movie star Byron Orlok, you might almost say that it’s about Karloff, and his inability to escape the creature he played three times in the 30’s. Included on this (Italian) DVD is the original trailer – ‘Karloff is back!’ it proclaims, adding, for good measure: ‘Karloff, Karloff, Karloff!’ A better title for the film might have been Frankenstein Created Karloff.

He gives the kind of exaggerated performance which normally prompts one to say that the actor is ‘enjoying himself’, except he really doesn’t look like he is. He seems as depressed as his character, a man who was forced by the Nazis to perform medical experiments in Belsen and now tells his (as far as we can tell, only) friend that he hardly sees himself as a man at all.

No, his performance is perhaps best described as sarcastic. We see him removing the TV director’s overly chummy hand from his shoulder with elaborate fastidiousness, then deliberately creeping out the leading lady (Jana Lund) by kissing her hand, before walking off, cackling, to play the organ, as if he were the Phantom of the Opera.

Which in a sense, forced to haunt the scenario of his former glories, he is.

Later, he delivers a prologue for the TV programme which lays on the Gothic clichés with bitter relish, as he explains how his ancestor created a monster which becomes ‘the very image of the devil incarnate.’ At least his acting is colourful, which is more than can be said for that of the rest of the cast.

The TV crew don’t amount to much, though they have their share of relationship issues. We see the director’s ex-wife (Charlotte Austin) drily observing him trying his luck with the leading lady, while herself fending off the advances of another crew member. Perhaps this is a glimpse into a cynical loveless future or maybe it was just the kind of behaviour that was expected from showbiz folks. The ex-wife even makes a joke about finding someone dead in Karloff’s oven. Is this a holocaust joke? – never mind 1970, even 2019 is ‘too soon’ for that one.*

As for the monster, he’s more like the mummy (a character also once played by Karloff), swathed as he is entirely in bandages; he shuffles around the castle looking (if that is the right word) for a suitable pair of eyes, eventually discovering them in Frankenstein’s friend. A close shot of the latter’s eyes fades into a shot of the same eyes peering out from the bandages – a nice touch from director Howard W. Koch, but not enough to save the film.

Karloff stopped playing the monster after 1938’s Son of Frankenstein because he couldn’t see that there was anywhere for the character to go. This aimless creature offers little to contradict his assessment, but after it stumbles, despite numerous warnings from Karloff, into the path of some radioactive steam and expires, there’s a twist: the monster proves to have been given a disfigurement-free version of its creator’s face.

The DVD also features the first version of Frankenstein, made by Thomas Edison’s company in 1910 and directed by J. Searle Dawley. I must admit I’d had the idea that this version was lost. If so, I’ve found it.

Though only about 15 minutes long and claiming to be a ‘liberal adaptation’ it is in some ways truer to the essence of Mary Shelley’s original novel than anything that came later. The shot of the monster looming over his creator as he lies on his bed in a swoon, or the later scene where the monster briefly supplants Frankenstein’s reflection in the mirror evoke the uneasy intimacy between man and monster that runs through Shelley’s book – I will be with you on your wedding night and all that.

It’s made clear that the creature, a bizarre scarecrow played by Charles Ogle, manifests something already lurking inside its creator – something which the intertitles simply call ‘evil’ – and the very fact that the film lacks the resources to open the story out necessarily brings the central relationships (Frankenstein’s bride-to-be included) to the fore.

The notion of a compromised or tainted identity was less apparent in later film versions: Universal’s approach to the story was to run with the monster as the dominant figure, whether it was played by Karloff, Bela Lugosi, Lon Chaney Jr. or Glenn Strange, while Hammer ran with Peter Cushing’s ruthless scientist, presiding over a variety of ‘creatures’. Ambiguity is a hard sell.

Karloff was, however, partly responsible for the popular confusion between Frankenstein and his creator – his ‘iconic’ image appearing on posters for James Whale’s 1931 Frankenstein was too strong not to claim the splendidly ominous name for itself (and the title of the 1935 sequel The Bride Of Frankenstein only perpetuated the confusion). In this way the ambiguity of the original text has found a way to survive.

With the creature’s ‘unmasking’ at the end of Frankenstein 1970 the confusion finally comes home to roost – Karloff is now both creator and creature. This is nothing like the blurring of identities in Shelley’s novel, with its murky overtones of (sexual?) guilt. It’s more like branding.

Karloff was already a brand. His real name, after all, was William Henry Pratt, whereas his adopted one was effective enough to be get into the title of one of his films (1949’s Abbott and Costello Meet The Killer, Boris Karloff).

The ending of Frankenstein 1970 does not have much impact on the viewer beyond maybe a glimmer of surprise, or maybe just bemusement – Karloff had previously been addressing the monster as ‘Shuter’, the name of his manservant (and unwilling brain donor) so that is the face we have been expecting. In terms of Karloff’s career, however, it feels like the brand has closed in on him, effecting a kind of premature burial. The horror is reserved for Karloff alone – his face is now ‘the very image of the devil incarnate’ and there is no escape from it.

But perhaps he would have greeted this fate with a wry smile – of course I have no idea what ‘the real Karloff’ would have thought. This ‘premature burial’ is one of many things shutting us off from ‘the real Karloff’, another being his actual burial – in fact, cremation – in 1969. He missed the real 1970, but I like to think that he didn’t mind. The fake one was bad enough.

*Or maybe not. There’s an oven joke in this year’s Puppet Master: The Littlest Reich, in which the lovably obnoxious Jewish character Markowitz (Nelson Franklin) slams a Nazi puppet (a plastic baby with Hitler’s hair and scowling face) into an oven with the words: ‘See how you like it!’

Funnily enough it’s one of the few moments where the film finds the right tone, or any sort of tone really. Despite S. Craig Zahler providing above average dialogue (and typically nudging the violence into the realms of the psychotic), flaccid direction, a dearth of plot and a glut of characters all work together to ensure that it falls desperately flat.

It features its own horror icon in the form of Udo Kier as the puppet master himself, Andre Toulon – he has sufficient presence that you wonder if he might have saved the project, but he disappears after the first five minutes, returning only in the form of a generic CGI demon at the end. To quote Brawl In Cell Block 99, disappointing.