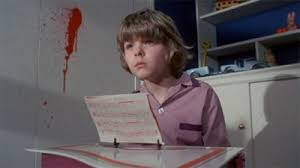 In its last episode of DTHOH Jennifer Jayne played a vampire who was staked through the heart by her doctor husband Donald Sutherland, but for TTWM she returns in a new form: writer. She scripted this in collaboration with her husband Art as ‘Jay Fairbank’. Does the film represent a glimpse into their relationship? Or relationships in general? I’ll say this much: it’s set in an asylum.

To that extent it resembles the previous year’s Asylum, another Amicus compendium in which the individual tales are the back-stories of patients – one difference being that whereas the lunatics ended up taking over that asylum, TTWM goes one better, unleashing the very stuff of madness itself, in the form of a tiger. Donald Pleasance is the doctor taking his superior (Jack Hawkins) on a tour of what he seems to think are his successful cases (I’d hate – or rather, love – to see the unsuccessful ones).

First up is a young boy with an unusually substantial imaginary friend, in fact the aforementioned tiger – named ‘Mr. Tiger’, because the boy’s imagination clearly does have some limits. So, perhaps, does Jay Fairbank’s as this story has what might politely be called unacknowledged literary antecedents, something it has in common with the Roy Castle voodoo jazz story in DTHOH, which bore a suspicious similarity to Cornell Woolrich’s short story Dark Melody of Madness.

Here it is both John Collier’s Thus I Refute Beelzy and Ray Bradbury’s The Veldt (itself filmed as part of Jack Smight’s 1969 Bradbury compendium The Illustrated Man) that come to mind. While this is less inspired than either it doesn’t seem to care. You might complain that it’s creating a travesty out of stolen material, but – watching it for the second time late one Friday night on the Horror Channel – I found myself admiring its cheek.

Donald Houston and Georgia Brown are the argumentative couple driven to distraction by their son’s insistence on Mr. Tiger’s reality. Houston, who seems to be in a permanent rage, also resents Brown’s mollycoddling of their ‘delicate’ little boy, and longs for him to come home with a bloody nose one day.

The pleasing irony of the story lies in the possibility that the son (Russell Lewis) has found a more effective way of dealing with his (male) aggression than hopelessly-stressed Daddy has, as is suggested by the last scene where he sits quite unruffled, playing on his little piano while his parents are eaten by his so-called-imaginary tiger right in front of him.

One thing that distinguishes this film from other anthology horrors of the time (Tales From The Crypt or The House That Dripped Blood, say) is a sense that it isn’t taking itself terribly seriously, which could be one way of saying that it is rather crude and slapdash. But it also points toward a vein of black humour running through the film – as Francis himself said, it wasn’t conceived as a horror film (the producers had other ideas), and so it remains off to the side somewhere, regarding the genre with a grim amusement.

The other thing that distinguishes it, to the extent that it is a horror film, is that it was written (albeit in collaboration) by a woman, and it’s just possible to distinguish a streak of feminist subversion in the unfolding stories, wherein the cause of all the trouble is generally men, even if their cruelty is not necessarily intentional – it’s just the way things are.

In the second story the ‘villain’ is ‘Uncle Albert’ (Frank Forsyth), who, operating from beyond the grave, compels his nephew, antique-shop owner Peter McEnery, to ride Albert’s old penny farthing back into the past. Here he courts Suzy Kendall (who also plays McEnery’s present-day girlfriend) in the guise of the young Albert, while a decayed version of the ‘real’ Albert looks on.

It’s a bit hard to say what Albert is getting out of this – perhaps he is some sort of Ultimate Voyeur, who can only enjoy his own past if someone else is enacting it in front of him, the kind of thrill I suppose Elton John gets watching Rocketman. This uncertainty is echoed in the tone, which starts out tackily whimsical (a framed photograph of Albert keeps altering its expression) but ends with the shop (and the penny farthing) on fire and the present-day Kendall succumbing to a sword in the back.

The third episode finds a better accommodation with the preposterous, with Michael Jayston bringing home a tree to his wife Joan Collins and setting it up in the living room even though it isn’t a Christmas tree – isn’t Christmas, in fact.

It isn’t an entire tree to be strictly accurate, just a part of one, and it has the name ‘Mel’ carved in it (an anagram of ‘elm’ perhaps?) Collins resents the intruder, which has a feminine look about it, but never seriously questions the situation’s basic premise, her husband’s right to bring large lumps of wood home without explanation.

It is her acceptance that is the most seriously improbable aspect of the situation – I can only think that this is based on something that really happened in Jayne’s relationship, since why would anyone even think of it otherwise? But I have no evidence for this.

It does perhaps suggest the extent to which a male sense of entitlement is – or at least was – entrenched in the culture. Even better, it hints at the absurdity of relationships in general, into which it seems that you can import anything, however ridiculous, and watch it be absorbed, instantly, into the prevailing dynamic – in this case, not a particularly loving one. At one point (this may be my favourite scene in the film) Collins throws her drink into the tree’s ‘face’.

‘Mel’ flexes her twigs and lumbers around a bit on the spot, but the film doesn’t dwell on how she manages to kill Collins and take her place in the marriage bed, and this is no doubt wise. There is always the possibility that Jayston has really been doing it all, but really we are beyond rational explanations by now.

(John Collier does spring to mind again. He did a story about a murderous plant – Green Thoughts – but more importantly he often wrote about male dissatisfaction with women, a dissatisfaction which in some cases leads to his heroes abandoning them for less demanding alternatives, like, say, a shop window dummy – in Special Delivery – or, in the novel His Monkey Wife… well, do I really need to go into detail?

Collier’s work is far more elegant and exquisitely-written than anything here, but if we were to imagine Jay Fairbank being in a dialogue with Collier, then her take on a similar scenario manages – perhaps through its very lack of style – to let the misogynistic roots of his black humour show through.)

In the last and longest segment, in which Kim Novak (would have been Rita Hayworth, had she not walked off set) plays a literary agent flirting with a Hawaiian client (Michael Petrovitch) who, to her irritation, seems more distracted by her daughter (Mary Tamm). He appears to be more than distracted in fact, and is soon declaring his undying love and planning to elope with her – though this is merely a ruse: what he really wants (naturally) is a virgin who can be cooked and eaten at a ritual feast which will save the soul of his dying mother. Or something.

The meat Tamm becomes (actually it does look quite tasty) is even fed to Novak, though only because the ritual demands it – once more there’s a sense of disavowed male cruelty. The story plays out in a banal way, like a particularly outré episode of Dynasty, but it has a certain ghastly fascination about it. It’s rare to see Hawaiian magic exploited in a horror film, probably because there is nothing remotely sinister about Hawaii, but this just adds to the beguiling atmosphere of poisonous blandness.

Finally Donald Pleasance argues that he has proved the ‘truth’ of his patients’ apparent delusions – thus no cure is required. Jack Hawkins, echoing the likely sentiments of the audience, is sceptical, but has to change his tune when he falls victim to the tiger from episode one.

I am tempted to regard this big cat attack as a final full-blown assault on the patriarchy – this is Jack Hawkins after all – inconsistent as this would be with my original assessment of ‘Mr. Tiger’ as a personification of specifically male aggressive impulses. But then the film itself is not very consistent, so I feel that I don’t need to be either.

This was Hawkins’ last film and I can’t think of a better way to go than being eaten by an (imaginary) tiger. In other respects this may not have been a film for which he would have wanted to be remembered, and Francis’ suggestion in The Horror People that TTWM might, without the interference of the producers, have worked as an investigation into the nature of reality does not really bear thinking about.

But there’s a kind of glee in its (mis)handling of horror themes that makes what could have been dispiriting fare into something strangely invigorating. Even the film’s comparative dearth of visual style (Freddie Francis’ stylishness – as evidenced in films like The Skull and The Creeping Flesh – is generally thought to be his strong suit) is somehow a plus point here. At any rate it kept sleep at bay on a Friday night, an achievement which, I can assure you, is not to be underestimated.