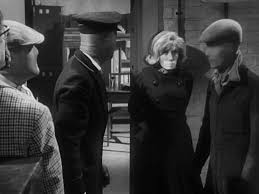 Vernon Sewell’s career in British film started, weirdly enough, with a German film – Morgenrot (1933) a collaboration with Gustav Klimt’s illegitimate son (one of them) that premiered in front of Adolf Hitler. Apparently Hitler liked it.

His next collaborative directorial credit came 10 years later, but at least he’d now worked out whose side he was on. The Silver Fleet stars Ralph Richardson as the Dutch owner of a dockyard finding ways to subvert the Nazis while ostensibly collaborating with them. It holds up rather well.

From here on in, Sewell, a man of independent means whose greatest enthusiasm was for yachting (his yacht appears in several of his films) helmed a wide variety of mainly low-budget productions including thrillers, comedies, horror films and social dramas. It’s almost as if he didn’t care very much what he did.

Maybe he didn’t. Maybe the films more-or-less assembled themselves. There is a sense in which films do that: a lot of the accidental attends them – questions of talent availability, mood of the talent, money, the weather and so on. You could say that films are accidents, happy or otherwise.

Then again there is no such thing as an accident. Strongroom is regarded as Sewell’s masterpiece, at least by the BFI – though TV Choice magazine gives it two stars when it turns up on Talking Pictures, signifying ‘average’ (there is no accompanying review, so quite how these stars are generated remains a mystery). I haven’t seen all of Vernon Sewell’s output, which is large, but still I feel that I can endorse the BFI’s view.

One has a sense, watching Sewell’s films, that he enjoyed fiddly little technical details – he was certainly engaged with the mechanical aspects of film-making, inventing in the early part of his career at Nettlefold Studios a cobweb-making machine, an achievement which earned him an appearance in the Illustrated London News.

If his films can sometimes get bogged down in such details, in Strongroom the banal is transfigured. You can see this right at the start – three prospective bank robbers sit in a car watching the bank and waiting for the right time to make their move. Inside, the manager (Colin Gordon) commands a young subordinate to fetch a box of cigarettes from his car. Observing the young man emerge and approach the car impatient robber Griff (Derren Nesbitt) is utterly bewildered – ‘What the hell are they doing in there?’, he asks, as if this mundane act has been transformed in his mind into the outward appearance of some unimaginably arcane banking ritual.

The strongroom itself is given a menacing presence of its own, like a dungeon in the bowels of Frankenstein’s castle. Into it the eerily faceless (stocking-masked) thieves fling the bank manager and his secretary (Ann Lynn) – the fact that Griff is also wearing a postman’s uniform adds an extra frisson of the everyday-turned-strange.

It is the arrival of two cleaners, chattering away in complete ignorance of the drama down below, that forces the robbers into this act. Thereafter the thieves are haunted by the imagined plight of the two captives, who only have a certain amount of air to sustain them – or rather Griff is. He insists that one of his accomplices gets the keys to the strongroom into the hands of the authorities, only for a fatal car crash to claim the man before the keys can be delivered.

This leaves two bank robbers, one of whom (Griff) is still determined to get the captives rescued while the other, Len (Keith Faulkner), brother of the dead guy, just wants to cut loose and leave the bank manager and his secretary to suffocate at their leisure.

At Griff’s insistence, however, they visit the morgue where the dead man is being kept in order to claim his possessions, among them the keys. They have reckoned without the stuffy morgue attendant (Duncan Lewis), who – alarmed by the intensity of their demands and stubbornly sticking to the regulations – refuses to part with them and alerts an initially sceptical policeman (John Dearth) to their unusual behaviour.

Our jobsworth morgue attendant, huffing and puffing at any threat to his routine, would probably now be classified as ‘on the spectrum’ (though aren’t we all?) and his amusing turn is succeeded by a couple of other characters along the same obsessive lines, who are unearthed by the policeman as he resolves after all to investigate the morgue attendant’s suspicions.

Their obsessiveness enables the exact location of the strongroom to be identified, making these characters agents of freedom – yet they seem more like the kind of people who get pleasure from locking things up. Meanwhile, this irony is reversed in the vault itself, where the straight-laced bank manager’s incarceration has caused him to ‘loosen up’, remove his tie and become – as he wryly acknowledges to his secretary – ‘almost human’.

So human does he become that he is able to admit that he never really wanted to be a bank manager at all but a printer (‘My parents didn’t consider it respectable.’) Strangely, it is only captivity that brings him the freedom to make this poignant, pathetic confession – on the outside, everybody is too in thrall to money, to the law, to their own little obsessions, to conceive of anything outside of them.

The bank robbers gloat over the possibilities opened up by their new-found cash, but Griff’s words – ‘Capitalists, that’s what we are. Capitalists!’ – suggests an awareness that he is still stuck in the system. His obsessive insistence that they return to the scene of the crime, even though it means that they are likely to be caught, might be inspired by a guilty conscience – or at any rate by the fear of a murder charge – but it is also a recognition that the freedom offered by this money is illusory.

At the end of the film we have the robbers and the police formed into an uneasy alliance as the former use welding gear to let air in to the prisoners while the latter wait to cart them off to prison. In their welding gear and their uniforms respectively they look as though they are participating in some mysterious ritual – perhaps the kind of thing Griff was imagining when he wondered, at the start, what the hell they were doing in there.

If it is a ritual it is one which ends in both rebirth and death. Having acquired an insight within this ‘burial chamber’ into how mummified he has become inside his own existence, the bank manager might well, we imagine, go on to fulfil his dream of becoming a printer. The secretary dies, however, and in so doing seals the fate of the two robbers, whose faces as they are informed of this are the subject of the film’s last shot.

It seems an unnecessarily cruel twist, particularly for Ann Lynn’s character, who dies offscreen. But rituals demand sacrifice – the system’s workings needing to be lubricated with fresh blood now and again, to ensure that those who try to take advantage of it are properly punished. Thus efficiency is maintained.

‘Efficient’ is a word often used to describe such better-than-expected B-movies as this – as if the system made them after all. Yet if the film ‘works’ it means that some kind of care has gone into it, something beyond the merely mechanical – a tight script (by Max Marquis and Richard Harris), performances that make plausible characters out of of even minor roles, and confident direction that never lets the tension slack. Such efforts attest to the presence of something like love.

But as the film shows, with its cast of characters obsessed with petty details and regulations, locks and keys, it is possible to love the system that traps us too.