London Film Festival 2019: Vivarium / Scales (and End Of The Century) 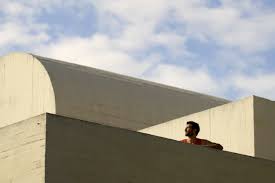 Director Lorcan Finnegan and writer Garrett Shanley’s second film sadly doesn’t manage to fulfil the promise of their previous feature, 2016’s Without Name. The LFF brochure compares it to The Twilight Zone and Black Mirror but while it could pass for one of the weaker episodes of the latter, it might usefully have emulated the running time of the former.

It begins well enough: Jesse Eisenberg and Imogen Poots are Tom and Gemma, a couple viewing a house in the company of an amusingly odd estate agent (Jonathan Aris), who then abandons them in an apparently unending maze of identical and uninhabited houses on a new development (‘Quality Family Homes Forever’, says the sign, with a witty echo of Orwell’s ‘boot stamping on a human face’).

Cardboard boxes arrive containing supplies and, in one case, a baby, who it seems they must bring up, although as he turns from boy (Senan Jennings) into young man (Eanna Hardwick) he turns out to be as weird and unlovable as the estate agent – and also winds up bearing a resemblance to H.P. Lovecraft (another nice touch).

The problem, as is often said to be the case with these new developments, is a lack of infrastructure. There’s nothing going on apart from the kid, and while he provides an unnervingly alien presence (it’s suggested that he is in fact an alien), he isn’t enough to sustain the film, any more than he can keep Tom and Gemma’s relationship from deteriorating. Soon Tom is spending all of his time digging a big hole in the garden which turns out (SPOILER ALERT) to be his own grave (also hers); meanwhile Gemma tries to bond with the child without getting anywhere.

There’s a dispiriting sense that we aren’t getting anywhere either – the film is not quite a bleakly absurdist take on suburban life and not quite a compelling piece of SF/horror in its own right. Towards the end there’s a nice grotesquely cartoonish bit where the grown boy, attacked by Gemma, lifts up the kerb and cockroach-like skitters under it; mostly, however, the setting isn’t used particularly well, and that endless vista of identical houses tends only to evoke – all too effectively – the threat of boredom on a cosmic scale.

A lack of infrastructure also undermines Scales, expanded from an apparently successful short, 2013’s Eye & Mermaid, into its director Shahad Ameen’s first feature, set in an imaginary community where men hunt mermaids for food, the mermaids being at least in some cases their own daughters, given to the ‘sea maidens’ as babies.

It’s a decent metaphor for a world that sustains itself on the repression of women – the director is from Saudi Arabia – and you can see how it would have worked as a short film. Even a brief 75 minutes, however, proves too long a stay in a world that doesn’t seem to have been imagined with sufficient thoroughness.

The heroine, Hayat (Basina Hajjar) whose father had second thoughts about throwing her into the water when she was a baby, is caught between the world of the mermaids and that of the land. Consumed with (self) hatred she begs to be allowed to join the all-male fishing crew but when she does so becomes squeamish about the whole thing, and it is rather as though her confusion has seeped into the film itself, which doesn’t end properly as a fable ought to but just peters out in a sequence of images that are presumably supposed to be haunting and suggestive but only make you feel like the film has run out of ideas.

The director was there, in the ICA, to confirm what this viewer had already suspected: that ‘post-production was a nightmare’ and that, not really sure what to do with the film she cut out a lot of ‘horrible’ exposition in favour of a more ‘poetic’ mode of storytelling. Yet exposition, however horrible, did seem to be what was needed – or at least a sense of this community extending beyond the edge of the screen. Perhaps a narrator would have helped.

As it is, the community, apparently reliant on the mermaids for food, doesn’t seem to be very sustainable – presumably mermaids can’t breed – and when the heroine announces rather airily towards the end that the sea maidens have ‘gone away’ and that the community will have to look to ‘other possibilities’ in order to survive it’s a problem that we have no idea what those possibilities, in this invented world, might be. Cod and chips anyone?

Not that there isn’t much to admire: the film is bold in conception and visually striking, just tentative in execution. It won best film at the Singapore Film festival though, so what do I know? Here it was up for, and didn’t get, the Sutherland Award for best first feature, which I would have given to an Argentinian film called End of the Century, even though it wasn’t in the running.

It is Lucio Castro’s debut though, and very deft it is. A couple of guys (Juan Barberini and Ramon Pujol) hook up while on holiday in Barcelona, eventually realise that they have met (and fucked) before, introducing a lengthy flashback, before the film slips into an alternative reality where they have been together for years and have a daughter, a transition signaled by the main protagonist stepping on a squeaky rubber duck.

The three scenarios cover a period from the late 90’s to the present and deal with the greater possibilities increasingly available to gay men, while also saying something – quite effortlessly – about the way we live now, the profusion of choices available to us all and the terrors they conceal. It helps of course that we already know the world we are in here, which is how a bath toy can achieve more impact than a whole shoal (flock? school?) of mermaids.