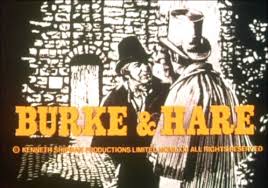 This is director Vernon Sewell’s last film and there’s something fitting about that: after two ventures into the more fantastical side of horror (The Blood Beast Terror and The Curse Of The Crimson Altar from 1966 and 1968 respectively) neither of which went out of their way to convince (quite the reverse in fact), here is something more pragmatic – not just a ‘true story’ but one about death, from which there is no coming back, unless it’s in the grubby mitts of a body snatcher.

It’s a queasy mix of horror-tinged drama and sex comedy which isn’t much liked by anyone as far as I can see, and yet… and yet…

The film’s weirdly fractured tone is apparent right away in the opening credits, where various Edinburgh street scenes or graveyard antics are rendered as black-and-white sketches, lending a respectable historical air to the proceedings, an impression instantly contradicted by the Scaffold’s unexpectedly jolly theme song wherein the listener is warned that Burke and Hare are coming ‘to snatch your body from you’ (itself an oddly abstract concept that raises numerous philosophical questions).

As the final ‘artist’s impression’ dissolves into the film’s ‘reality’, something of the static formality of the drawings clings to the action. In the interviews with cast and crew members on the Odeon DVD, the late Sewell comes across as a distant figure, so detached from his role that he happily let star Derren Nesbitt direct some scenes.

This fundamental disinterest (if that is what it is) expresses itself in a lot of long to medium shots, suggesting a kind of fastidious approach that’s strangely appropriate to the sordid subject matter – not that Sewell is prudish, or I doubt if he would have had his wife (Joan Carol) play the madam in the local brothel. But this distance almost manages to impose some sort of unity on the film’s wayward tone.

It is, of course, a film about bodies.

First and foremost there are the ones delivered up for cash to Dr. John Knox (Harry Andrews) by Burke (Glynn Edwards) and Hare (Nesbitt). Although the first body is acquired by chance when one of Burke’s boarding house lodgers expires, an element of ‘capitalist realism’ soon kicks in, so that before long there’s a virtual production line underway.

The other bodies are those of prostitutes in the local brothel, where the film spends a lot of its time and where there is a lot of peeking through holes in walls and doors at the sex games going on within, so that what is presented as bawdy larks has its effect somewhat sobered by a voyeuristic chill of distance.

Our medical student hero (Alan Tucker) is first smitten by his love interest (Francoise Pascal) on watching her being chased around the bedroom and thrown on the bed by a randy soldier. Later scenes of Burke and Hare practicing their killing technique with Hare’s wife on a bed – then struggling with a real victim – seem to recapitulate that earlier scene, though here there are no voyeurs, except us of course.

The effect of the film, then, is to blur the distinction between bodies living and bodies dead – that both prostitutes and corpses are in the process of being bought and sold only serves to equate them further. The extraordinarily long sequence in which the brothel burns down, sending prostitutes and clients fleeing for their lives, is scored in jaunty fashion by Roger Webb, as though we were watching a farce: that’s how little these characters matter. The disappearance without explanation from the film of the prostitute Janet, played by Yutte (Lust For A Vampire) Stensgaard, is another case in point.

We get the ‘money shot’, so to speak, when Pascal’s Marie becomes a victim herself and is laid out on the slab in front of the medical students, her boyfriend among them. At this point the camera, forgetting to keep its distance for once, indulges in an uncharacteristic zoom in on her face. It’s a triumph of vulgarity that also works as a way of confronting the viewer with the implications of their (sorry, our) ghastly appetites.

It’s like we are the body snatchers, temporarily bodiless observers using the bodies presented to us on the screen as a means of living vicariously. If the bodies on screen are only puppets, then this makes the confusion between living and dead bodies apt; neither does it matter so much that the performances here are nothing like as nuanced as they are in John Gilling’s The Flesh and The Fiends (1960), the most artful film version of this story.

Nesbitt is fine as the brash Hare, whose confidence dissolves in a combination of class-related intimidation and superstitious dread when he first visits the hospital with an offering (though it pops back up again soon enough) and Yootha Joyce glowers magnificently as Mrs. Burke. Harry Andrews is fine too, jesting with colleagues about his patients’ private parts, but not a patch on Peter Cushing’s impersonation of the same character in TFATF; everyone else is serviceable at best, but serviceable is all that is required.

The ending is abrupt, as the discovery by police of a body in Hare’s room ushers in a narration explaining how it all turned out, while the final image of the body transforms back into a drawing, as if to suggest that none of this was much more than a sketch anyway.

Thus ends the last film in Sewell’s prolific career, and it is one which reveals cinema as a combination of knocking-shop and morgue. Comedy, as Sewell’s 1947 film The Ghosts of Berkeley Square suggests, was not his forte – but that doesn’t mean he had no sense of humour.