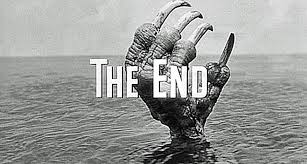 How often have I fantasized about the government forbidding me to leave the house so that I am finally compelled to watch all the DVDs I have accumulated over the years?

Well never, since that would have been absurd, even for a fantasy. Nevertheless here we are. Or at any rate, here I am.

The film, for a start. But I knew that already. The Giant Claw is a ‘bad film’ and morbid curiosity is the main draw, but there are as many kinds of bad film as there are bad films and I am genuinely excited to discover the disappointments this one has to offer.

It begins with a turning globe, representing the Earth. It’s a highly unconvincing representation, resembling a child’s plastic toy (though not an educational one). But it sets the tone.

The narration gives us a potted history of human achievement, all of which, we are given to understand is now under threat from a giant bird from space, whose advent represents nothing less than ‘almost the beginning of the end of life on this earth.’

Tastefully blurred in its first screen appearances, the bird proves to resemble Emu’s inbred cousin (though capable of flight) or a failed muppet. With its beak set in an expression of surly disdain and its mouth – complete with teeth – permanently open (as far as the ‘face’ goes, only the twitching nostrils display any real animation) the bird, a string-operated puppet, lacks both charm and threat.

Initially as sceptical as the viewer, the military are eventually stymied by the imperviousness of this ‘overgrown buzzard’ to weapons of any kind, protected as it is by a plot device (‘field of anti-matter’) which also shields it from detection by radar.

While the bird is undoubtedly a danger to the public, roaming the world and at one point making off with the dangling carriages of a train in its beak like a dog with a string of sausages, it is just a big bird and it seems to have settled in Quebec, so the the worldwide panic might indicate a certain amount of hype at work.

In Quebec it is mistaken by farmer Pierre for La Carcagne, a witch of local legend who takes the form of a demonic flying creature and whose appearance heralds death for those who see it. When Pierre is eventually gobbled up by the bird Sally, the heroine, turns to Mitch, the hero, and rather insensitively remarks: ‘He was right, seeing it did mean his death.’

Sally is a mathematician and Mitch a pilot but both turn out to be ‘key workers’ in this crisis. Their relationship, as mediated by the enormous space-bird, is the film’s secondary concern.

It begins with Sally scoffing at Mitch’s reported sighting of the creature (a reversal of the conventional position of ‘rational’ male versus ‘hysterical’ female – though the hysteric is right in this case) and proceeds from this kind of ‘professional rivalry’ into more serious territory when Mitch kisses her on the lips while she is sleeping next to him on a plane journey, behaviour which at that time would presumably not have been regarded as remotely creepy.

This gives rise to a lengthy flirtation largely conducted through arch references to baseball – the dialogue in this film has an air of being terribly pleased with itself, for no good reason – and which ends in stalemate, though you are left with the feeling that Sally is definitely interested.

It’s notable that Sally’s one big insight into the prevailing crisis is not mathematical but ‘womanly’: ‘The bird came here to build a nest’, she says, which seems to alarm Mitch unduly as though it is a coded indication that Sally is looking for more than just a casual relationship.

If this is the case then the later scene in which they both shoot holes in the bird’s egg (not protected by an anti-matter shield, fortunately) offers reassurance: Sally, declaring that she was brought up in Montana, is perfectly comfortable with picking up a rifle and taking potshots at the nest. This is the couple’s one true moment of equality in the film – it’s as if they have found common ground in a rejection of domesticity, exulting in a shared sense of freedom from society’s expectations: bring on the 1960’s!

Soon enough, however, the uncertain status of the woman, so typical of SF/monster movies of the era, rears its head again. It is Mitch, whose knowledge of physics is surprisingly in-depth, who comes up with a means of destroying the bird using ‘mesic atoms’. He wants to exclude Sally from the final expedition to kill the bird and bring ‘a calculator’ instead – this might be intended as old-fashioned gallantry but the suggestion that she can be replaced by a machine (at least I assume it’s a machine and not a low-skilled worker) comes across as brutally dismissive.

In fact they can’t get a calculator anyway so the question is academic – we are left to conclude that chivalry has no place in the modern world, not so much because it is patronising as because it’s inefficient. And of course all goes well, and the titular claw (or one of them anyway) is last seen sinking into the sea, taking with it all those intimations of monstrous femininity – for now.

As for the viewer, stuck in his or her own ‘nest’ for the foreseeable future, we are left to cope with the Horror Channel’s next presentation, The Incredible Shrinking Man, a fine film (also from 1957) in which the domestic looms very large indeed, and the hero ends up roughly the size of the Coronavirus, lost in the wilderness of his own basement. I’m not going to go there.