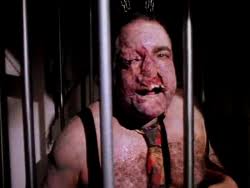 Based on a memoir by Lloyd Kaufman, co-founder of Troma Entertainment, and director of many of its ‘hits’, such as The Toxic Avenger (also on this Czech DVD under the title Toxicky Mstitel), this film is essentially Kaufman’s 8½.

He plays a blind director (yes, it ain’t subtle) struggling to create ‘art’ while a hermaphrodite serial killer (mentally and physically scarred by his dad Ron Jeremy, who he now keeps at home in a cage) picks off the cast. Though it isn’t always clear if the killings are in the film or outside it.

That might be called self-reflexivity I suppose, but one thing this film makes clear is that that doesn’t necessarily go hand in hand with intelligence. Much of the ‘humour’ here derives from juvenile PC-baiting, though at the same time this account of a bunch of freaks and misfits coming together to make a film might almost be seen as a celebration of ‘diversity’.

Well OK that may be pushing it. There is a sympathetic gay character, but every time a black person appears on screen it is just prior to them being shot dead or crushed. I don’t take this as racism (though what do I know) but as a knowing reference to tokenism; maybe you could even call it ‘satire’. But before considering the application of such lofty terms you have to remember that this is probably the only film in history in which the killer (SPOILER ALERT) is ultimately overcome by a lit fart.

Maybe the best you can say about this is that it has a certain chaotic energy and an abrasive charm. This last is probably a contradiction in terms, but no more so than a ‘life-affirming rape scene’, which is what the film-within-the-film (also called Terror Firmer) is working towards. This is more clunky ‘satire’, this time of directorial pretension, but at least it suggests an awareness that ‘life-affirming rape’ is a contradiction in terms…

Similarly the killer’s takedown of overgrown fratboy ‘the Toddster’ – designated a gay man in denial and furiously overcompensating – resembles feminist critique. Though it could just as easily be homophobia.

As for anything remotely trans, forget it. Though there is a mock-appeal for sympathy for hermaphrodites, helmed by the late Lemmy from Motorhead, during the (endless) end credits. The hermaphrodites are played by Matt Stone and Trey Parker, who arguably lend the skit a sort of goofy innocence.

Also, a very fat man is eaten by an escalator, with quite a lot of assistance from the (axe-wielding) killer. This is not a very convincing scene but imagine my surprise when shortly after watching this I saw that there was a documentary showing on Freeview called Eaten By An Escalator. Yes, apparently this happens – every now and then a hapless escalator-user falls through a suddenly-appearing gap into the ‘hostile environment’ (as one interviewee termed it) below.

Although in the only actual instance I saw (since I couldn’t be bothered to watch the thing for longer than ten minutes) the victim survived ‘unbelievably’ with only ‘minor injuries’.

The other film on this Troma trilogy DVD was the reason I ordered it in the first place. Though no better-titled than the above, Screamplay is an atypical Troma presentation – it’s a good film.

Budding screenwriter Edgar Allan, played by the director Rufus Butler Seder, has barely arrived in Hollywood when he is mugged in a toilet by a drag queen on roller skates. Luckily Martin (George Kuchar) arrives and breaks the drag queen’s neck, before facilitating their escape from the police.

Martin owns an apartment block, in which he installs Edgar as the custodian, enabling him to spend every spare moment working on his screenplay, a ‘murder story’ inspired by his fantasies about killing anyone who annoys him.

There is no shortage of candidates in the apartment block, whose tenants include a sexually needy has-been actress (M. Lynda Robinson) and a VERY LOUD burned-out rock star turned religious maniac (Basil J. Bova). At some point Edgar’s script goes AWOL, at which point its contents take on a life of their own, its killings enacted by (SPOILER ALERT) aspiring actress Holly (Katy Bolger) who has been (unwisely) advised by Edgar to get in touch with her dark side.

Visually the film, often pastiching silent Expressionist horror, is striking enough to overcome, if not exactly conceal, the low budget and the performances make up in enthusiasm for what they lack in subtlety (which is perfectly in keeping with the silent movie ambience). Seder, who co-wrote the script with Ed Greenberg, models his look on Rotwang from Metropolis and his performance on a point somewhere between Jack Nicholson in The Shining and Stan Laurel, and somehow it works.

The film might have turned out as glibly self-reflexive as Terror Firmer but proves to have a mad sincerity about it. The presence of Kuchar, a legend of underground cinema, helps. This might be as far above the surface as he ever got, though Curt MacDowell’s Thundercrack! (1975) in which he married a gorilla, is better known. This is mainstream in comparison – here his character merely hankers after Holly, though his bedroom is decorated with pictures of musclemen. He seems at home.

Traces of Thundercrack! can also be seen in Terror Firmer, and its killer’s obsession with pickles, but that’s another story.

As we know, nothing is black and white. Apart from films like Screamplay and this (on Arrow Video), which features an outstanding example of what would now be called ‘colourblind casting’. Here, two more-or-less identical brothers are played by Dennis Haysbert (black) and Michael Harris (white), who don’t look alike in any other respect either. The only people who are aware of this, however, are the audience.

It’s a bold move from directors Scott McGehee and David Siegel and it might have been merely bemusing, but in fact it turns out to be a masterstroke.

On the surface the plot goes like this: Harris is Vincent Towers, the richer brother, who is facing the likelihood of going on trial for his father’s murder. He invites his long-lost near-identical brother Clay (Haysbert) to stay, then promptly absconds, leaving him to be blown up by a car bomb on the assumption that Clay’s body will be taken for his.

Clay’s body is, however, still a living one, though requiring a lot of surgery, cosmetic and otherwise, to get him back to how he was – or at least how Vincent was. Psychologically there are some problems too, as naturally he can’t remember being Vincent and neither, due to amnesia, can he remember being himself either. He can only try to be who everybody around him expects him to be with the one proviso that Clay is as far as we can tell a nice, down-to-earth guy while Vincent is a supercilious murdering bastard.

The personality switch encourages his plastic surgeon, named (ahem) Renée Descartes and played by Mel Harris, to fall for her patient. Due to her alterations, Clay is no longer recognisable as the killer of Vincent’s father by the trial’s star witness, which means that he is off the hook – or rather, Vincent is.

As Clay embeds himself in Vincent’s life and begins to remember what really happened, Vincent returns, only to be shot by Clay in self-defence. But which self is he defending? Finally, having remembered that he is Clay, he decides to forget all about that loser and become Vincent, whose body (face obliterated) has not been recognised.

If we get too hung up on realism this all becomes wildly improbable since people can clearly be identified by means other than facial resemblance. But this is precisely why the superimposition of Haysbert onto this scenario works – the film is about surfaces, and disrupts its own surface in a way that continually throws you off balance, keeping you simultaneously fascinated and alienated.

In a way the film suggests that you can’t penetrate the surface and become another person, even as it shows this happening. The voiceover of the psychiatrist Dr. Shinoda (Sab Shimono) explicitly states this at the end, but the vision of Clay enjoying his brother’s luxurious lifestyle lend this coda overtones of racism.

The casting of Haysbert is the mischievous element in a film which is otherwise very controlled and mannered. Japanese and American films of the 60’s like Face Of Another and Seconds (both from 1966) are acknowledged influences on this, but I found myself thinking, as so often, of David Cronenberg. He has made his own identical twin film, Dead Ringers (1988) but it’s his cool, clinical tone overall that comes to mind here, as well as his mischief-making – though with Cronenberg this is an element that is more likely to emerge in the form of (say) an exploding head than in an intervention of Suture‘s kind.

(Talking of which, in 1981’s Scanners the hero does manage to infiltrate the body of his brother at the end.)

In Suture, the casting of Haysbert proves disruptive to orthodoxies of all kinds, both PC and racist. It suggests the idea of black people as scapegoats for white civilization (at one stage we see Haysbert, sporting an eyepatch, being picked out of an otherwise all-white – and eyepatch-free – line-up of murder suspects) but it also worries at notions of equality.

Although I used the word ‘superimposition’ above Haysbert is absolutely at the centre of this and his relaxed performance forms a contrast to the careful, distanced behaviour of everyone around him, rich relatives and health professionals alike. In line with the visuals, this makes you wonder if this is where he ‘belongs’ and if equality means ‘losing your soul’. Or is that racist?

In these times, where everyone is meant to be questioning their attitudes to race, Suture might be a useful text, even if it doesn’t have any specific recommendations. Its signature image is the enormous Rorschach blot which adorns one wall of Dr. Shinoda’s office. It is black and white – and also, endlessly, open to interpretation.