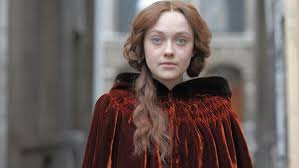 Before he (apparently) disappeared into thin air, Emilio P. Miraglia made a couple of films blending the giallo with the Gothic, 1971’s The Night Evelyn Game Out of the Grave, and this, his last film. The giallo and the Gothic are simultaneously very different (the one modern and glossy, the other cobwebbed and gloomy) and very similar – both tend to feature women trapped in elaborate, menacing structures: a castle, say, in the Gothic mode, and in the giallo, the plot.

The script of The Red Queen Kills Seven Times (Arrow Video), by Miraglia with Fabio Pittorru, crams the two genres together in a fairly crude way. The heroine (Barbara Bouchet) is a fashion photographer (that’s the gloss) whose family home is a castle (that’s the cobwebs). However, that simplicity is not echoed in the convoluted storyline.

Even the explanation of the curse supposedly falling on two sisters in the same family every century is a little hard to follow, and that comes before the credits even start.

Apparently there are always two sisters who don’t get on, to the extent that one – the Black Queen – kills the other – the Red Queen – who then rises from the dead to commit seven murders, the sixth of which is that of her sister. Seven murders may seem excessive for a family curse, but for a giallo…. not so much.

The rivalry between Kitty (Bouchet) and sister Evelyn looks set to start the cycle up again, especially when Kitty accidentally kills – or seems to – her sister and a red-cloaked figure starts running around stabbing people. Is this a ghost? If so, it is one that can drive a VW.

No, of course it isn’t a ghost, as a proliferation of murder suspects serves to indicate. These include Kitty’s lover Martin (Ugo Pagliai) and his crazy wife Elizabeth (Carla Mancini), and Sybil Danning as a scheming model called Lulu Palm, who is aiming to be Martin’s next lover. ‘Even the police know I’m an incredible nymphomaniac’, she announces, before skilfully divesting herself of all her clothing during a brief cutaway to her object of desire.

Meanwhile the real killer – or rather, schemer – is Kitty’s other sister (did I forget to mention her?) Franziska (Marina Malfatti) who has enlisted yet another sister, Rosemary (Maria Pia Ciancaro), to help her implement a fake curse because she wants to be the sole heiress – and, moreover, she’s completely insane.

Not even Kitty (let alone the audience) knew about this fourth sister because she was brought up in another family, and in fact she is technically only a third sister since the one Kitty killed, or thought she killed, and whose body (they keep checking on it) is stored upright in the castle cellar, wasn’t her real sister at all, but a substitute brought in as part of an elaborate attempt on their grandfather’s part to evade the curse.

I’m not sure if this plan worked or not – do faked curses count? I suppose not as, although quite a few characters die (I lost count), Kitty survives, despite ending up in a basement room expressly designed to be flooded with water and thus drown Gothic heroines, along with any rats which might be around. There are quite a few as it turns out, hardly improving Kitty’s experience.

But, all the other sisters having been dispatched, Kitty is eventually released, leading to the film’s most impressive scene, in which the flooded chamber is opened and a massive tsunami engulfs the remaining cast members and all but sweeps the set away, expelling Kitty in what might be seen as a symbolic rebirth, confirming her status as the only surviving sibling.

Certainly it is a wonderfully excessive moment, and while not precisely cathartic brings with it a magnificent sense of catharsis, Miraglia’s catharsis alone perhaps. It’s as if this was what he was really aiming for throughout his career and, having achieved it, he could now disappear into obscurity.

There is also a sense of the Gothic finally triumphing over the petty complications of the giallo through this one great flourish, at the end of a film in which (like the rival sisters) they never quite make friends, fun as it is to watch them trying to rub along.

This period piece (Freeview) starts out in promising Gothic mode with the young heroine Effie (Dakota Fanning) marrying art critic John Ruskin (Greg Wise) only to find that he is revolted by her sexually and that his parents (Julie Walters and David Suchet) with whom she now lives in the family home, are domineering monsters who are obsessed with their son to the exclusion of all else, particularly Effie – neither, even outside the bedroom, does Ruskin himself show much interest in her.

Directed by Richard Laxton and scripted by Emma Thompson, this is not, however, a Gothic horror film but a true story (though it doesn’t say so explicitly) and sadly fails to deliver any of the hoped-for lurid thrills. It doesn’t deliver much of anything else either.

Effie manages to escape the oppressive atmosphere of the house for a trip to Venice, where she gets to enjoy herself a bit, before almost being sexually assaulted (not by Ruskin, who continues to ignore her). After this she returns to the family home defeated, and becomes a passive and unfortunately rather dull figure, so much so that when the artist John Everett Millais falls for her during a trip they take to Scotland with Ruskin, it is hard to see why.

As I understand it, the real Effie was somewhat feistier.

It’s as though an idea of the victim as ‘saintly’ – a feminist martyr even – has been imposed on the material, an idea weirdly and ironically echoed in the fact that Effie remained a virgin throughout her marriage: this proof of her ‘innocence’ was what enabled her to escape the marriage in the end and marry Millais.

Or perhaps Thompson simply can’t understand victimhood, and this is why she has to interject herself into the proceedings as the fearless and sympathetic Lady Eastgate, to gee Effie up a bit. Perhaps she could have taken a leaf out of Emilia P. Miraglia’s book and had Effie gasping at bats and slugs in the cellars of the house before being imprisoned in a cell slowly being filled with water by a cackling Walters and Suchet.

Or is the real victim here Ruskin, totally dominated by his parents as he is? Wise’s performance allows us glimpses, beneath his emotional paralysis, of the trapped and helpless boy within, which makes it easy to understand why he might have related to Effie better when he first met her at the age of 12 (when he was 22).

As for Effie, she ends up fleeing Ruskin and getting the marriage annulled. Missing is the expected final paragraph telling us that she did eventually marry Millais, have eight children and become an artist in her own right, but perhaps, after the drab presentation of our heroine and her trials, this might have proved unintentionally hilarious.

Though at least it would have offered catharsis of a kind.