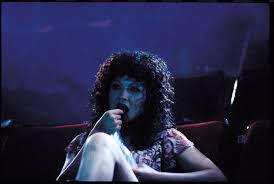 I saw this in late 2016 at the Barbican in a season called Cheap Thrills, a celebration of bad taste.

Is this then a ‘bad film’? If so, we need to dismiss any judgmental qualities that might still be clinging to the word ‘bad’. We are not condemning the film; if anything we are quite excited, and rightly so.

This Hong Kong production, partly set in Thailand, has a simple plot (a man has to avenge his crippled brother in the boxing ring) that goes hand in hand with a slightly more obscure one (the same man has to become a Buddhist monk and fight black magicians for the immortal soul of his spiritual twin). Something like that anyway.

It’s really all about the imagery. Director Kuei Chi-Hung’s film is extraordinarily compelling merely on the level of wondering what the hell we are going to see next. Bat skeletons resurrected, a crocodile eviscerated, floating heads with tentacles – always assuming that I didn’t simply imagine some of this, those are some of the ways in which black magicians seem to express their art. That, as depicted here, these manifestations are not entirely convincing is of no consequence – indeed it adds to what could be called the film’s naïve charm.

The spiders who at one point embody the forces of evil resemble children’s toys slurping at some kind of Satanic gloop through what look like straws. There is a lot of gloop in this film – I’d never imagined that Buddhism could be this much fun.

Not that I know how traditional any of this is. Suffice it to say that the lines between the spiritual and the physical are decidedly blurred.

Or not even blurred – crossed. The hero’s initial scepticism when his spiritual destiny is revealed to him is resolved briskly by a scene in which he vomits up a large eel in the sink of his hotel bathroom. After this he meekly submits to becoming a monk. So would I.

The hysteria generated by all this is enough to produce a kind of feeling that must be the Western cynic’s equivalent of religious awe: one kneels before this mad overload of grotesquerie, and looks on at oneself kneeling before it, and – not without irony – smiles.

It’s an out of the body experience either way.

Another side to Buddhism emerges in Tsai Ming-liang’s film, which I also saw at the Barbican – maybe even in the same screen – in early 2017, as part of a season… well I don’t exactly remember what kind of season it was. Certainly not bad films anyway. This is a good film. I know this because it featured in a list of the top ten films of all time compiled by Tsai Ming-liang, director of Goodbye Dragon Inn.

The setting (a Taipei cinema on its last legs) allows Ming-liang to contrast his approach to film-making with the more conventional one exemplified in martial arts classic Dragon Inn, the film that’s showing, while giving him a space he can haunt with unfulfilled longing (it’s a cruising spot for gay men) and (ambiguously) actual ghosts.

If Dragon Inn is an action film, this is an inaction film. The camera’s long stares evoke slow-burning desires and induce meditations on the nature of cinema. Sounds, like the cracking of watermelon seeds in the mouth of a (possibly spectral) female spectator, resonate eerily. Water drips from the ceiling. The club-footed ticket-seller (Chen Shiang-chyi) clumps slowly around, flushing each of the men’s toilets in turn, her effortful movements contrasting with the acrobatics of the martial artists onscreen.

The Barbican showing had a surprisingly high turnout, with a lot of people arriving late, helping to establish a sort of conversation between one auditorium and the other. One guy walked out mere minutes before the end, just as the ticket seller left the auditorium during what may be the longest shot of the film, a hard stare at a lot of empty (?) seats.

Was this a last straw for him? Did he feel compelled in some way to mirror the onscreen ‘action’? Was he meeting someone for a drink? We shall never know, any more than we can remedy the various failures to connect that proliferate in this film, whose central non-event is the ticket-seller’s abortive attempt to establish a relationship with the projectionist (Lee Kang-shen).

As I write the auditoriums are all deserted – though not for long – but Goodbye Dragon Inn, for all its elegiac tone, suggests that an empty cinema, like an empty church, still has something to say. As I understand it (really I don’t), Buddhism (Ming-liang is a Buddhist) has a special place for emptiness, just as it apparently does for crocodiles and bat skeletons and toy spiders.

Next week brings another chance to reconnect spiritually with that emptiness. I can’t wait; I’ve also learned, partly from films like this, that I can.