Apples / In The Earth 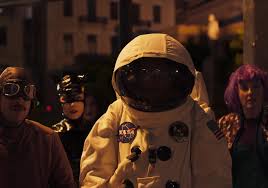 Who on earth, returning to the cinema after – well OK, during – a global pandemic would go and see a film that is about the pandemic, even if obliquely?

About six people (including me) is the answer, if this afternoon showing is anything to go by.

Apples seems like the kind of oddball film I would normally have seen at the ICA if it had been open at the time, but I caught this at the Curzon Soho. It isn’t literally about COVID – it’s about an epidemic of amnesia afflicting the populace of Greece (at the very least) so that victims suddenly stop dead in the middle of what they were doing and no longer have any idea of who they are.

We first see our hero Aris (Aris Servertalis) sitting slumped on a sofa with the blinds drawn behind him, accurately reflecting my experience of lockdown – in fact, my experience in general now that I come to think of it. Subsequently he turns up on a bus, no longer aware of who he was and where he lived, and – no relative or friend having claimed him – is put on a government scheme to give him a new life.

This process involves him being kitted out with a new flat and obeying taped instructions encouraging him to participate in activities which various scientists have defined as ‘normal’, including having sex in a toilet and crashing a car into a tree – he then has to use a Polaroid camera to provide evidence of his successes.

Lockdown is dealt with obliquely, but it is there in the alienation from ‘real life’, the well-meaning but just-possibly-misguided intervention of scientists in every aspect of your daily existence, and in the fact that even Greece has apparently (if temporarily) got so much public money that it can fund this scheme. (Although this is qualified by the distinctly lo-tech aspect of the intervention, which puts us in another universe entirely.)

The tone established by first-time director Christos Nikou is one of deadpan absurdity. There are some nice touches, like Aris walking on his heels in deference to a hospital cleaner’s attempts to mop the floor, which works nicely as a metaphor for what we have all been doing at this time, contorting ourselves into neurotic shapes in order not to imperil certain clinical ideals.

Finally, however, this proves to be about grief, as it’s made pretty clear that Aris has been feigning amnesia as a way of dealing with the loss of his wife. His taste for apples seems to be the one thing that he holds onto from his old life – presumably there’s also some ‘original sin’ symbolism there, the sin being the acquisition (or in this case the retention) of knowledge.

It’s at the moment where he decides to switch from apples to oranges (apparently because he has been told that apples are good for the memory) that something in him revolts, and he abandons the masquerade, returning to his old flat and life, and immediately tucking in to an apple that must be well past its best, even if it still seems to provide some kind of comfort.

This is the diminished ‘new normal’, then. We have grieved, many of us literally, and it may be that we are saying goodbye not just to individuals, but to a certain idea of civilization.

I don’t just mean the pre-pandemic society, I mean that revised version of civilization that briefly took hold during the pandemic, fuelled by good intentions but so basically out of tune with our real selves that everybody had to wear masks.

Leaving the vaccine aside, the scientists’ interventions may not have worked, or not in the way they were supposed to, but they have demonstrated something – possibly just that you can’t simply ‘have faith’ in science, which is not, after all, a religion and is not necessarily going to save you.

The things we thought tied society together only worked because we never had to think about them – now, we are forced to take another bite of the apple of knowledge. Does it still taste the same?

Ben Wheatley also takes a plant-based approach to the pandemic in what seems to be a bit of a return to his roots – or at any rate a return to form after the last Wheatley effort I saw (Happy Birthday Colin Burstead) which was not very good (neither was his most recent film, a take on Rebecca, by all accounts).

Not sure how this one has been received by the public but it seemed to disappear from the Curzon cinemas in London after one week, so I had to relocate to the Picturehouse Central (costly but comfortable) in order to join the – by now customary – other five afternoon punters. Not the same ones I trust, though it is possible – I don’t look too closely, and some were wearing masks.

The film is set during a pandemic that comes across as slightly more apocalyptic than the current one, though we don’t get too many details and are a long way from civilization throughout. Martin (Joel Fry) is a scientist setting out into a forest with park ranger Alma (Ellora Torchia) in the hope of connecting with ex-colleague (and ex-lover) Olivia (Hayley Squires) who is investigating subterranean communication between trees.

En route, however, the pair run into her barmy ex-husband Zach (Reece Shearsmith) who has come to distinctly different conclusions about the network of intelligence possibly connecting the trees, and accordingly has set up his own separate camp, where he explores his conviction that this intelligence is the manifestation of a dead wizard’s spirit, and best approached through prayer and ritual.

Forced to participate in Zach’s rituals – which look likely to culminate in human sacrifice – Martin and Alma eventually manage to escape (minus a couple of toes in Martin’s case) and make it to Olivia’s camp, where she has set up a sort of son et lumiere in an attempt to communicate with an entity which she sees in more abstract, scientifically-detached terms than Zach does, though she is just as mad.

Which is not to say that this ‘madness’ isn’t itself a manifestation of natural forces, as a mist of spores causes Alma and Martin to hallucinate and Wheatley to bombard us, quite impressively, with psychedelic imagery of the kind they have to warn you about before the film starts.

Olivia suggests that Martin’s presence in the forest attests to his being compelled by these mysterious forces, and eventually tries to sacrifice him in a ritual of her own, only to be stopped by Alma, who in the aftermath offers, in a portentously-altered voice, to guide Martin out of the forest.

This final line suggests that she has been possessed by the presiding spirit of the woods (and possibly the entire country) a spirit which may be identified with the mythical female creature Parnag Fegg who is said, at the start of the film, to haunt the forest – or perhaps it conforms to a woollier idea of ‘Mother Nature’.

Or maybe none of these things. There does, however, seem to be a notion of the pandemic as nature stepping in to reconfigure society along more wholesome lines, which at least provides a neat ironic contrast with Alma’s previous insistence that, post-pandemic, people will just go back to their old ways – not to mention her sceptical comments about Olivia’s tendency towards anthropomorphic thinking.

The pandemic, then, becomes a sort of return of the repressed, leading to carnage and subsequently healing. Since all we know about Martin is that he has lost his parents to the pandemic and that he was in a relationship with Olivia, we could just about read his ordeal as a quasi-Oedipal nightmare, with Olivia and Zach in demonic loco parentis and Zach’s toe surgery as symbolic castration.

The determinedly unpretentious Wheatley would probably scoff, but I did think he was trying to play with ideas here, with Olivia and Zach resembling those scientists from JG Ballard novels who go off-grid to explore their own strange obsessions.

However, I read in Sight and Sound that Wheatley saw their theories as analogous to the conspiracy narratives that have sprung up in the wake of COVID. This might be why they fall a bit flat – he isn’t really invested in them, not even in a spirit of intellectual exploration, or fun. Shearsmith conspicuously underplays, like Vincent Price in Witchfinder General, but I think I would have preferred more histrionics, like Vincent Price in almost anything else.

Lorcan Finnegan’s 2016 film Without Name handled similar concepts with more ingenuity but perhaps less verve – certainly it had none of Wheatley’s visual dynamism. In The Earth‘s looser, slightly thrown-together feel makes it lively and engaging, while Fry and Torchia are winning protagonists.

As with Apples, there is the idea of a crisis leading to a new beginning, but here a bite of the apple is liable to lead to hallucinations – not necessarily what the doctor ordered. Wheatley may be keen to dismiss conspiracy theories, but he has only replaced them with fuzzy mysticism as far as I can tell.

Then again neither film offers a crisp vision of the future, which is probably just as well considering how hard to predict events have been lately. Wheatley at least offers vague hints of something better, and it’s nice to see the spirit of the woods – and possibly the nation – embodied in an Asian character.

All very much in the well-meaning spirit of the times, but there’s nothing wrong with hope, fuzzy as it might be.