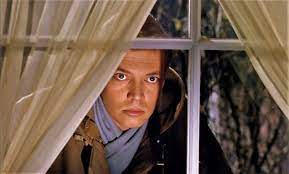 I used to say that Michael Powell’s Peeping Tom was my favourite film. That I don’t say it now has nothing to do with the quality of the film or my changing perception of it; more, it’s down to a realisation that there are too many films, and that I have too many moods, for the idea of a ‘favourite’ to mean anything.

But if it does mean anything, Peeping Tom is as good a choice as any, and better than most. It’s the story of Mark Lewis (Karlheinz Böhm, appearing here as Carl Boehm), who is obsessed with filming the fear on the faces of the women he kills with a specially adapted camera.

It’s as if the film offers a critique in advance on the many slasher films that came later but which it didn’t exactly spawn – at the time it was reviled, with one reviewer strongly suggesting that it should be flushed down the sewer (‘Even then, the stench would remain’). It ruined Powell’s career.

Of course that it was misunderstood, even hated, adds to its appeal. It was ‘ahead of its time’: a self-aware horror film long before such things became fashionable, but one with an heart and a strong sense of its time and place. It’s ‘monster’ is sympathetically drawn, his psychological malaise has an emotional logic to it as well as a symbolic function. The film might seem to wallow in sleaze but it has an oddly romantic sensibility; despite which its take on cinema is bracingly, chillingly modern.

Mark is the survivor of his father’s experiments in fear – that the young Mark is played by Powell’s son Columba, and Mark’s father by Powell himself is one of the many unnervingly perfect things about Peeping Tom.

Traumatised by his father’s penchant for, say, chucking a lizard on his bed and filming his distress, Mark has grown into an adult who projects his fear onto women, the camera (reinforced by an extendable tripod with a spike on the end) becoming the means by which this transfer can be definitively accomplished.

In this way he can try to ‘become’ his father, the (notionally) unfeeling scientist, with the camera as his apparatus. Except he is an artist, not a scientist: he is not merely observing phenomena, he is trying to process and contain emotion within a pleasing (to him) aesthetic. But the perfection he insists upon – achievable, perhaps, in the reason-led world of his father – continually escapes him. Art is never quite perfect – though Powell’s film comes close.

Alexandre O. Phillippe’s 2017 documentary 78/52,about the shower scene in Psycho, often feels uncomfortably like a lot of men fawning over the precisely-executed depiction of a woman’s violent death – which is exactly what it is of course. It references Edgar Allan Poe’s notion that there is nothing more poetic than the death of a beautiful woman, a notion echoed not just in Psycho, but in many, many other horror films.

Preceding Psycho by a few months, Peeping Tom suggests the reason for this: that men, who are not normally encouraged to display vulnerability themselves, make women into vessels to contain and express it for them.

The extraordinary thing about Peeping Tom, however, is that its killer has not lost contact with a certain vulnerable childlike quality himself – this is present in all his dealings with Helen Stephens (Anna Massey) the downstairs neighbour (technically Lewis’ tenant) with whom he forms what may have become more than a chaste bond, had circumstances permitted.

The ostensible occasion for their coming together is a children’s book called The Magic Camera, which Helen has written and Mark will illustrate, all being well (‘If I’m free’, as he puts it, aware of the police investigation closing in on him).

Mark’s enthusiasm for the project, though it may partly be a manifestation of his feelings for Helen, is disarmingly genuine, and suggests the child inside him, the part of him that never got over the death of his mother.

First time screenwriter Leo Marks’ dialogue is splendidly terse and witty while remaining naturalistic – only in the case of Helen’s blind mother (Maxine Audley) does it become slightly overwrought (note her portentous comment on Mark’s complaint that ‘the lights fade too soon’ in one of his films: ‘They always do.’)

This evokes her self-pity, but also points up an almost Gothic element. The blindness of Mrs. Stephens is more than just an irony (she is the one character who ‘sees through’ Mark), or an anomaly – it evokes the void that has swallowed up Mark’s own mother.

Although Mark’s bond with his father looms large in the film, Mark’s late mother is another significant absence. She is missing from the ‘home movies’ we are shown except as the hands of a corpse young Mark is seen ‘saying goodbye’ to, but we observe his disdain for ‘her successor’ – as he terms her – and his suppressed emotional reaction to walking into his mother’s old room, where Helen has stored his camera while they go on a night out.

Mark’s morbid project is no doubt a way of punishing women for not being his mother (his need to make them look into their own reflected faces as they die seems to reinforce this notion) but perhaps there is also mystical element to it – on some level, it’s a way of penetrating the barrier between life and death, which separates him from his parents.

The fact that Mark’s victims never seem to think of simply dodging the blade coming towards them is a further testament to his camera’s ‘magic’ power – and also to a film which is able to use the hypnotic aspects of cinema to transcend realism without breaking the spell it has created. Mark’s soulful gaze as – for example – he approaches a model with a facial scar near the beginning of the film, hints at something spiritual in his quest.

The barrier between life and death is policed by fear, and it is fear which obsesses Mark. Having, like his father, conducted his own ‘experiment’ in fear, at the end he is finally able to embrace it as he impales himself on the spike of his camera (‘I’m afraid – and I’m glad I’m afraid!).

Viewed with a coldly ‘scientific’ eye, Mark’s death is no disaster, but rather the intended outcome of his project – no longer having to project his vulnerability onto women through his infernal device, he can use it to confront the problem directly.

The murders are essential, not just for Mark’s own pathological reasons, but because they create the conditions that force him into this final act, which, however, may have a goal which is entirely unscientific – a posthumous reunion with his parents.

This killer is still a child, and always wishes to remain one. This is what makes him sympathetic, to the degree that he is. The film’s initial critics resented being made to feel any human connection with this character – it was too much of a leap. But did they also resent being asked to feel a connection with Powell himself?

My falling-to-pieces 1980 edition of Leslie Halliwell’s Film Guide shows the negative attitude to Peeping Tom still persisting – describing the film as ‘thoroughly disagreeable’, Halliwell called it ‘a kind of compendium of the bad taste the director showed in flashes during his career’. (Or as Mrs. Stephens puts it: ‘All this filming is unhealthy.’)

Halliwell was notoriously unreceptive to anything ‘modern’ – although he gave Psycho three stars (in contrast to none for Powell’s film), he dismissed it as ‘a tremendously successful confidence trick’. There is something in that (though it could be said of a lot of films) and there is also something in his notion of Peeping Tom summing up Powell’s career: Powell was an Austrian who turned his gaze on the British just as Mark Lewis – also clearly a foreigner – does.

In films like The Life and Death of Colonel Blimp (1943) and A Canterbury Tale (1944) Powell and long-time collaborator Emeric Pressburger produced fond but clear-sighted portraits of ‘Englishness’. In the latter, the ‘flash of bad taste’ was provided by Eric Portman’s magistrate pouring glue into women’s hair to stop them hobnobbing with American soldiers. It’s a bizarre detail but perfectly calculated to bring out a certain sexually repressed oddness that is (unless I’m just talking about myself here) characteristically English.

In Peeping Tom we have a bumbling old gent played by beloved character actor Miles Malleson (more usually expected to turn up as a comedy vicar) coming in to a newsagent for the Times and the Telegraph, and walking out with a selection of under-the-counter ‘views’ of naked women (snaps presumably taken by Mark) while Mark, listening in, smiles.

It may be that such mockery of cosy notions of English respectability came across as a sort of ‘last straw’ for the critics. Faced with the ultimate provocation of Peeping Tom, they were finally free to express a resentment they had always secretly felt at being seen so clearly by a foreigner. In its presentation of Mark’s gaze as both destructive and tender, Powell’s film seems to be aware of this possibility too.

It is possible to imagine an unholy alliance of knee-jerk ‘feminists’ and Brexiteers (or maybe just Liz Truss) joining together to consign Peeping Tom to the sewer again – fashion dictates more of our opinions than we care to imagine. But if that actually happened it would only confirm this film’s lingering power to disturb. The twinkle in Powell’s eye would be undiminished.