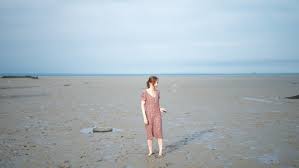 I see that the Barbican are putting on a summer season of ‘post-horror’ films. Is that a film you see after a horror film, for light relief perhaps?

Well no, apparently – it’s just another iteration of our old friend ‘elevated horror’. So the films in question (The Witch, Hereditary, It Comes At Night and It Follows) are just ‘sophisticated’ (or at least would-be sophisticated) takes on the genre, favouring existential unease over jump scares.

The tendency as before is to denigrate the genre as a purely mechanical means of dishing out frights in order to artificially elevate the films in question. Still, ‘post-horror’ suggests something more radical, a fundamental shift which the above films, whatever their merits, don’t quite manage. It seems to me that a ‘post-horror film’ ought to leave you wondering on some level: was that really a horror film?

Alex Garland’s Men is a horror film I think – but it did leave me wondering.

Jessie Buckley plays Harper, who lives in London with her (black) husband James (Paapa Essiedu) or at least she does until she threatens to divorce him and he threatens to kill himself, and does. In fact there is some ambiguity over whether he leaped or fell to his death, but dead he definitely is – except there’s some ambiguity around that too.

Seeking some kind of escape, Harper books a solitary country house retreat. The reason I alluded to James’ race is that her action suggests a rejection of urban diversity in favour of some pastoral dream of cosy Englishness – in other words, this is probably about Brexit.

Harper has come too close to ‘the Other’ and wants something familiar. The village she winds up in is so far from diverse that all the men are played by Rory Kinnear, including Geoffrey, the owner of the house, the local vicar, and even a schoolboy (though here, some CGI trickery comes into play).

It’s the kind of stunt more usually found in comedy, as in a recent episode of the BBC’s Worzel Gummidge (which also has some folk-horror tendencies) when Toby Jones played a whole parish council. Here it proves distracting rather than just creepy – so yes, we may well be ‘post-horror’ already.

Harper begins her sojourn by eating an apple from the tree in the country house’s garden, an offence for which Geoffrey jokily berates her. The Biblical allusion to the Fall of Man is hard to miss, especially given the manner of James’ death.

This notion of Harper as ‘sinful’ is later confirmed by the vicar, to whom she unburdens her anguish over her husband’s death, only for him to suggest that she (secretly believes that she) ‘drove him to it’.

Harper is also menaced by a naked Rory Kinnear prowling around the garden and trying to break in – this character, initially presented as a local madman, later becomes an incarnation of the Green Man of folklore, as if, having suggested that God isn’t on her side, Garland wants to establish that nature isn’t either.

As the film works its way up to a climax Harper is tormented in her holiday home by various iterations of Kinnear, all of whom bear a wound inflicted by Harper’s knife. The wound splits the man’s/men’s arm in two, lengthways, though both halves still seem to function.

Divertingly grotesque as all this is, and Garland does create a menacing atmosphere, there was always a detached part of me wondering what it all meant. He also chucks in a W. B. Yeats poem for good measure, Leda and the Swan. Reading it afterwards, I think I can see why. But at the time it was just another thing that made me go hmmm.

Garland seems to be interested in his heroine’s guilt, in how much of it is innate and how much is imposed by James and a society geared to men’s needs. The film ends with a showily grotesque sequence in which Kinnear either gives birth to himself over and over again – as if to parody the idea of nature as male – or sheds several skins – as if to demonstrate that in this Garden of Eden, man is the serpent, and so revealing the split arm as an analogy of the snake’s forked tongue.

It might be that Garland wants to show the whole traditional patriarchal circus as ‘special effects’ – superficially impressive, but with no real substance. In the classic English ghost story, there is the notion that the central character is being haunted by repressed feelings returning in a supernatural form – if we apply this model to Men, and decide that Harper is being tormented by her own repressed guilt, we are forced to question the authority of the repressed material. Even if Harper does ‘secretly’ feel guilty, that doesn’t mean that she ‘really’ is.

The emergent ‘snake’ is a surprisingly subdued James, asking to be loved – Harper seems bemused, as was I. Finally, we can’t be sure of how much of what has happened to Harper has happened ‘objectively’. At the end her friend Riley (Gayle Rankin), with whom she has been communicating off and on, arrives to find Harper, unharmed as far as we can tell, in the garden and traces of blood and a crashed car to confirm the reality of at least some of the night’s events.

Riley is pregnant, suggesting, maybe, that the ability to reproduce is back where it belongs. At any rate, it is another aspect of the film which demands to be ‘unpacked.’ I was too exhausted by this stage to make the attempt. I have said that horror is more about questions than answers – but there may be such a thing as too many questions.

The film’s cerebral energies and its visceral ones seem to be at odds, but we can perhaps say that we have at least ended up somewhere that might be, to some extent, ‘outside’ horror, questioning some of the ideas that prop it up.

Yet possibly the ultimate post-horror film is not even one that leaves you wondering whether it is really a horror film, but one that definitely isn’t.

It’s a relationship movie and an art movie (though one which has time for Abba and Tina Charles’ I Love To Love). It certainly isn’t a horror movie; and yet it exists in a relationship with the genre.

The couple’s ongoing debate about Bergman, with Chris questioning Tony’s admiration for the ‘darkness’ of his vision, has Chris describing Cries and Whispers as ‘a horror film without the catharsis’ and choosing not to watch Hour Of The Wolf, the one Bergman film which sits comfortably (or uncomfortably) within the genre. There are recurring references to ghosts, in which Bergman is said to have believed.

At one point we are suddenly dropped in to a sequence where a terrified woman is being pursued at night by a man who she eventually stabs – is this Chris’ nightmare? No, it is one of Tony’s own films, which is screening on the island.

The film Chris is currently working on also materializes before our eyes in scenes played out by Mia Wasikowska and Anders Danielson Lie – this isn’t a horror film but a story of unrequited passion, though there is something uncanny in its playing around with the ‘reality’ of what we are watching, taking in characters from the film proper, and eventually shifting to a whole new meta-level wherein Wasikowska and Lie are now playing themselves playing the characters from the film Chris is now directing.

This uncertain reality, the talk of ghosts, Chris’ solitary explorations of deserted landscapes and buildings all contribute to a certain ‘haunted’ feel, a suggestion that the ghost of Bergman is still trying to direct events, at least in terms of his lingering artistic influence.

In the end Tony goes away for a time, leaving Chris to agonize over her creative endeavours (resulting in the abrupt meta-shift previously alluded to). When he returns it is with their daughter in tow – she has been asking about ghosts, fears he has addressed with a comical zombie impersonation on the ferry.

When they arrive Chris is not immediately visible but Tony tells the little girl to ‘find Mummy’ and lets her run off. There is a distinct echo here of a familiar horror film ‘trope’, one that crops up in Men, in fact – the protagonist has been left alone to ‘face their demons’, some kind of transformation or resolution has occurred, and we are left with a faint anxiety about what the returning loved one will find: will Mummy be changed somehow; or dead?

Not at all, Chris is just fine and the film ends with her embracing her daughter. The viewer, attuned to the subtleties of what has come before, may find this trite; but then we are back to the question of how valid it is to look ‘through a glass darkly’.

And if ‘post-horror’ does exist, that’s exactly the question you would expect it to be asking.